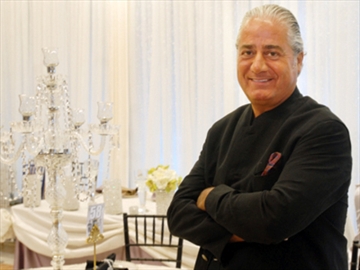 Chances are if you have been to a wedding or formal event in Vaughan, you have been to one organized by ByPeterandPauls.com.
The hospitality and entertainment group is marking 30 successful years this year, in an industry that isn't for the faint of heart.
Starting out as Paul's Fine Foods, a restaurant/bakery, it morphed into several companies that include facets of the hospitality industry including catering, gift baskets, event management, photography, advertising and design and DJ and A/V solutions.
The five venues owned by ByPeterandPauls.com are among some of the busiest ones in Vaughan, including Paramount, Bellagio, The Manor and The Vue.

Owner Peter Eliopoulos offers a little insight into why the company has prospered despite economic downturns.
"I have the hospitality gene. Hospitality is in my DNA. Loving what you do and doing a good job of it is part of it, but I also think it's the upbringing, the way you are brought up in the family. When you do something, you do it well," Mr. Eliopoulos said. "By trying to do a good job and be on top of things, it works at the end of the day."
Mr. Eliopoulos noted in today's industry especially a personal touch is something he always strives for.
He has noticed many changes in the industry during his 30 years, chief among them is the introduction of technology, which he believes isn't always the simple way.

"What would take one person to do something 30 years ago, today we need five to do the same thing, because of the way things have been done," Mr. Eliopoulos explained, adding he used to take orders on napkins when he started. "This has really complicated things."
Now, a person booking an event will speak to three or four different co-ordinators.
One question Mr. Eliopoulos doesn't hesitate to answer is what he loves about the hospitality industry.
"It's to be able to create something and make a bride and groom or a corporation happy and to be able to put all the creativity and all the energy in a party and see it succeed. That, for me, is important," he said.
One would have to enjoy making people happy, given that in over 30 years, ByPeterandPauls.com has hosted 66,350 parties, entertained 5,830,040 guests and served up 28,840,000 cocktails.
The Greek-born entrepreneur  considers himself lucky that despite an economic downturn, the business has prospered more in the last two years than ever before.

"Last year was bigger than the year before. It's been amazing and I'm very thankful for that," Mr. Eliopoulos said.
Right now, the company is working on a project: a new venue in King Township. But there are no immediate plans to branch out into anything else for the time being.
"The company is a lot right now. Retaining what we have and keeping it at a high level. For 30 years we're leaders in the industry, just maintaining what we have is enough," Mr. Eliopoulos said.
The days running a hospitality business keep him busy.
Seven days a week, he gets up between 4 and 5 a.m. and goes all day, often finishing between 10 p.m. and midnight.
But he's not complaining about the nature of the work, which is a social job.
"When I'm designing a party, I'm so pumped up," Mr. Eliopoulos said.
In his spare time, the grandfather of two spends a lot of time with his family and plays tennis.
Over the years, he has learned the most important thing in the industry is to be honest with clients. He offers simple advice to young entrepreneurs getting into the industry.

"If you have the hospitality gene, go ahead and do it. If you don't, don't try to force yourself to be in this business. It's a hard business. You work when other people are partying," Mr. Eliopoulos said.
"There's no faking this industry. If they are going to get into business, then they have to really seriously look at it," Mr. Eliopoulos said. "You really need to have a feel for the business to really succeed."
The company has planned various parties over the course of this year to celebrate the three-decade milestone, including a cruise for the company's management. They are also bringing people to Paris on a wine trip later this year.